concerning a local authority manager who had second thoughts after handing in her resignation letter. 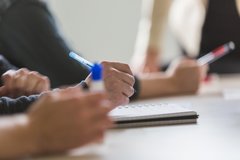 The woman, who worked as a member of an adult safeguarding board, claimed that the council had not done enough to address bullying and abuse to which she was being subjected by one of her subordinates. Following a period of sick leave, she handed in the letter, by which she unequivocally resigned on three months’ notice.

At a subsequent meeting, however, she alleged that an HR officer and the board’s chairman asked her to reconsider her decision. She said that she agreed to stay on so long as her subordinate’s behaviour was properly dealt with. She considered that that had been achieved when the subordinate was moved to work elsewhere under someone else’s management.

The date on which her resignation would have taken effect came and went but she carried on working for the council, which continued to pay her. She took the view that her resignation had been withdrawn, or at least paused. About two weeks after the expiry of her notice period, however, the council stated that it had not agreed to her retracting her resignation and that her employment would come to an end.

In upholding her appeal against that decision, the EAT found that the ET had erred in law in proceeding on the basis that her resignation could only be withdrawn by express words, rather than by conduct or implication. There was evidence that the council had wished to retain her in its employment and that its personnel had initiated discussions concerning the possibility of her staying on.

The ET had failed to make any findings on important factual issues – in particular as to what was said, by whom and when, following receipt of the resignation letter. Although the woman had not resigned in the heat of the moment, the letter was written soon after her return from sick leave and at a time when she was clearly under strain. Her case was remitted to a freshly constituted ET for rehearing in the light of the EAT’s ruling.