such conversions have been carried out to such a poor standard as to place residents’ health – even their lives – at risk. 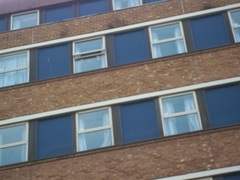 The case concerned a 1970s office block which had been converted into what was described as an ‘apart-hotel’. It had 47 self-contained accommodation units which were occupied under licences in return for monthly fees. Although people had been living there for some years, the building had never been certified as having been completed in compliance with building regulations.

A local authority housing officer who visited the premises in response to residents’ complaints found that a number of the apartments were freezing cold and entirely without heating. She expressed concerns about the adequacy of fire precautions. More than 500 separate defects were found in the building’s electrical installations, nine of which were found to pose a present danger to occupants.

The council issued multiple improvement notices on the company that owned the building’s freehold and its sole director. Although some remediation works were carried out, the council took the view that the notices had not been complied with and levied civil financial penalties under the Housing Act 2004. Further penalties were also imposed for breaches of regulations concerning the licensing and management of houses in multiple occupation (HMOs). Altogether, the company and its director were each ordered to pay £236,600.

In ruling on their challenge to those penalties, the Upper Tribunal (UT) rejected arguments that the property was properly viewed as a hotel rather than an HMO. The building was non-compliant with building regulations and, having been converted into self-contained flats, it fell within the definition of an HMO contained in Section 257 of the Act. Most of its residents occupied their apartments as their only homes and would not regard themselves as guests in a hotel.

The council was entitled to impose penalties on the company and its director for non-compliance with four improvement notices and for five breaches of the Licensing and Management of Houses in Multiple Occupation (Additional Provisions) (England) Regulations 2007. The UT found, however, that the penalties imposed by the council were disproportionate. The company’s penalties were reduced to a total of £75,000 and the director’s penalties to a total of £99,000.